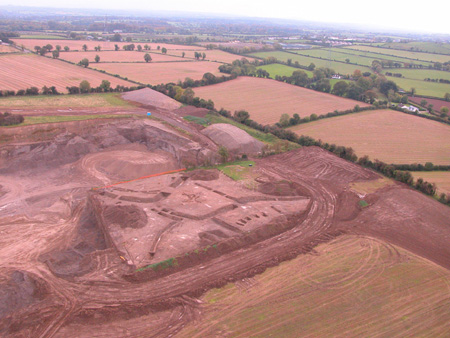 Archaeological excavation licensing data is a real-time source of construction output data that is easily obtained and can provide a relative indication of construction activity at any time of the year.

In Ireland the main source of data on construction output is the Central Statistics Office (CSO) which produces the Production in Building and Construction Index that covers, on a sample basis, the production of all firms in the private (i.e. non-State) sector whose main activity is building, construction or civil engineering. Approximately 2,000 firms are surveyed each quarter and the survey takes approximate three months to collate and estimate and a further three months to produce final figures. Because of the detailed collation and number crunching involved this is a look-back exercise that tells you were the construction industry has been three to six months earlier. The index also has limited predictive ability, it doesn’t signal when a change in trend is going to occur.

Archaeological excavation licensing is a real-time source of construction output data that is easily obtained and can provide a relative indication of construction activity at any time of the year. Under the Planning Acts archaeological assessment and preservation by record is an integral part of the development process and must precede all development projects in Ireland that impact archaeology from house extensions to shopping centres at both the planning and construction stages. All archaeological investigations require a license under the National Monuments Acts and the licenses are granted by the National Monuments Service just days before an excavation takes place. Therefore archaeological licensing is sensitive to changes in trend. The license database is constantly updated and can be used to track activity in the sector on a weekly, monthly, quarterly or annual basis. 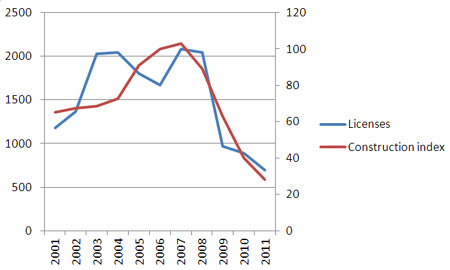 Chart comparing the numbers of archaeological licenses to construction output in the period 2000-2010.

Comparison of the annual figures for construction activity in the CSO index and excavation licenses in the period 2000 – 2010 (see chart) indicates a close relation between the two sets of data. From the year 2000 both sets of figures were on an upward trend but from 2002 the increase in the numbers of excavation licenses preceded and predicted the large increase in the construction index that occurred after 2004. After a short decline in 2004 – 2005 the number of annual licenses peaked at the same time as the construction index and has moved along an almost identical trend of decline to the end of 2010. The statistical correlation of the two number series is 0.805 indicating a relatively high degree of positive correlation.

What is particularly interesting about the licensing data is that it captures information about pre-development testing, which can take place years before the actual construction, as well as pre-construction excavation. For this reason the data may provide early indicators of a change in trend. The 2002 acceleration in licenses preceded and may have predicted the 2004 acceleration in the construction output. It may be useful to extract the pre-development testing licenses from the overall data and see how they correlate with construction output. There is the possibility that this data will provide early signals of both upward and downward trends in the data.

Of course archaeologists have used the number of licenses issued as a barometer of the health of the construction industry for years. The correlation between archaeological licenses and construction output suggests that any future increase in the latter will be preceded by an increase in the numbers of the former. By keeping an eye on the relative numbers of licenses issued and making quarter on quarter comparisons economy watchers may be able to pick up an early signal of a return to construction growth.

3 thoughts on “Archaeological Licenses: a Real-time Indicator of Construction Output”