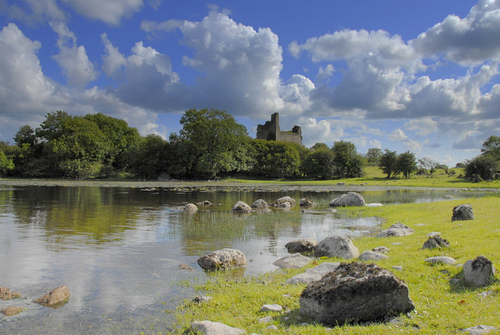 The castle and harbour at Rindown

Ireland’s ghost estates are nothing new. Examination of Ireland’s history indicates recurring cycles of development, failure and abandonment of villages and towns.

In recent years the Irish news has been filled with the struggle with the problem of ghost estates, how to deal with more than 2,800 speculative housing developments that remain empty and may never be occupied. But a landscape of ghost towns is not a new phenomenon, throughout history Irish villages and towns have gone though recurring cycles of development, failure and abandonment. The buildings of the abandoned ghost towns eventually fell into disrepair and then decayed back into the earth leaving nothing but agricultural fields.

Looking at the Medieval period, the thirteenth century was a boom period for development as the new Anglo-Norman lords encouraged English and Welsh settlers with promises of prosperity and civil privileges to immigrate to Ireland and establish new villages and towns. These new settlements initially thrived but in the following centuries large numbers of the towns, like Rindown, Co. Roscommon and Newtown Jerpoint, Co. Kilkenny, were deserted by their inhabitants. Other towns, like Ballysadare, Co. Sligo and Kilcullen, Co. Kildare, moved to new locations. The reasons for the failure of these towns were varied. Incessant ethnic conflict and warfare isolated the towns from their natural hinterlands, discouraged further immigration and drained civic resources, leading to economic decline. In the mid-thirteenth century the plague known as the Black Death reduced the populations of the towns by a third to a half and hastened the decline. The development of new infrastructure, particularly the construction new bridges, also contributed to the failure of towns as commerce shifted to new routes and locations. 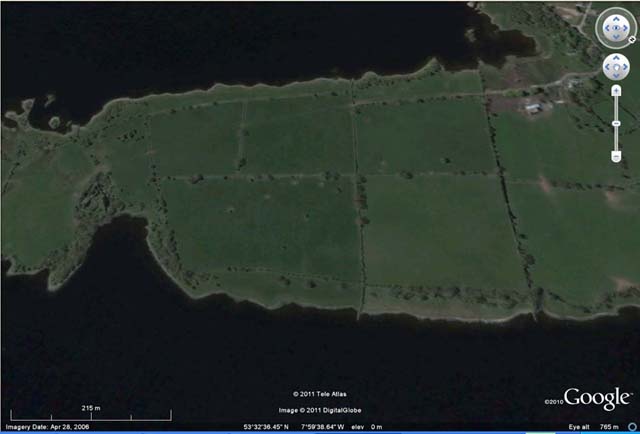 A classic example of a Medieval ghost town is Rindown, Co. Roscommon. Rindown was established in 1227 and consisted of a castle, harbor, church, market with cross and numerous houses all defended by a high town wall with guard towers. The town was very prosperous, imported corn, cloth and wine from as far away as Bordeaux and achieved a high annual rated value of £320. But poor relations with the native Irish population resulted in the town falling victim to isolation and attacks that eventually caused its abandonment. Today the stone castle, church and walls survive but the rest of the town has reverted to pasture land, its only inhabitants are cattle and sheep. 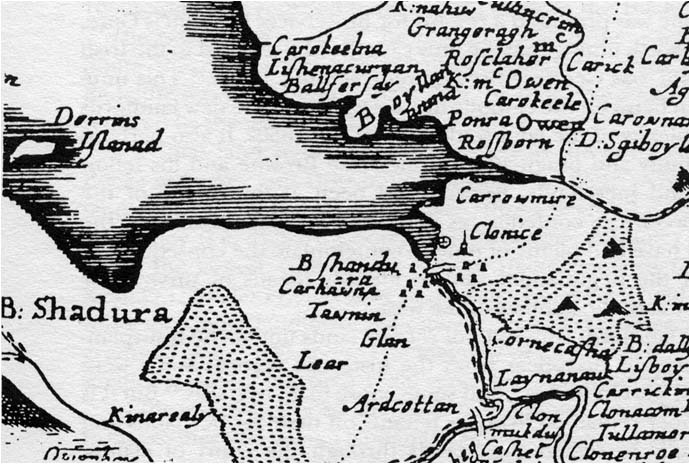 Other towns, like Ballysadare, Co. Sligo and Kilcullen, Co. Kildare, moved to new locations. Ballysadare had developed around St. Feichin’s Abbey to the west of the Owenmore River near the fording point of Ballysadare Bay. In the fourteenth century a bridge was built across the river further east. At some time before 1654 the town moved from its original location to the site of the bridge as is indicated on William Petty’s 1654 map of the area. The original location of the town reverted to farmland with nothing but the stone church of St. Feichin marking its location. 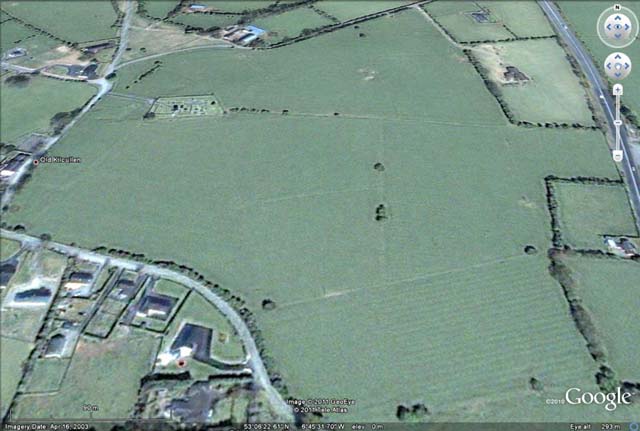 Google Earth image of the site of Old Kilcullen. All that survives today is the church, round tower and crosses. The rest has returned to farmland.

Kilcullen, Co. Kildare was originally situated on a hill top 2.5km south of the River Liffey. The construction of a bridge over the river in the fourteenth century lead to the foundation of the new town of Kilcullen at the bridge. The original town, now called Old Kilcullen, was eventually abandoned in favour of the new location. All that survives at Old Kilcullen today are the remains of a church, round tower and crosses, the rest of the town has disappeared and the fields are now grazed by sheep.

Although Ireland no longer suffers from ethnic strife and plague, cycles of settlement development, decline and abandonment are still driven by migration, economic change and infrastructural development. The modern Irish ghost estates are not unique to our time, but are part of this recurring historical cycle. Like the abandoned Medieval villages and towns that came before them these ghost estates may one day also revert back to farmland.

Dr. Charles Mount is a Cultural Heritage Consultant and Archaeologist with an interest in history. You can read his recent publication on the history of the Medieval manor of Nobber, Co. Meath here.

O’Rorke, T. 1878. History, antiquities, and present state of the parishes of Ballysadare and Kilvarnet, in the county of Sligo; with notices of the 0’Haras, the Coopers, the Percevals, and other local families.