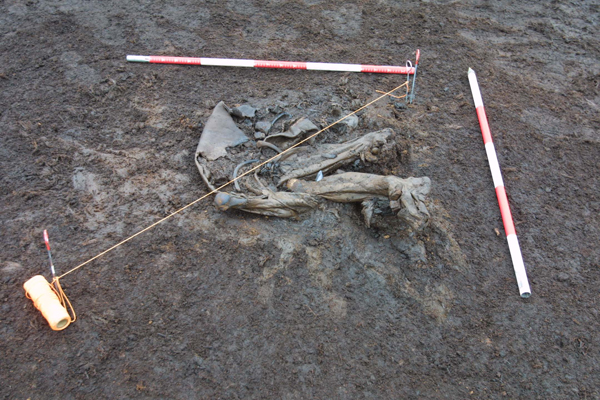 The remains of the Cashel bog body were found by a Bord na Mona worker in August 2011 in Cashel Bog, Co. Laois, south of Portlaoise, and promptly reported to the National Museum of Ireland. The find was investigated by Eamonn Kelly, Keeper of Antiquities. As Bord na Mona Project Archaeologist I was also notified of the discovery and visited the site during the investigation. Eamonn Kelly has just published his preliminary findings in a paper entitled “The bog body from Cashel Bog, Co. Laois” in the Ossory, Laois and Leinster No. 5. The remains are those of a naked young adult male placed in a crouched position, either on the bog surface or in a shallow pool, on his right side with his legs tightly flexed and aligned north-south with the head at the south. The burial site was marked with two stakes of hazel wood placed into the bog at an angle that crossed above the head of the body. The head, neck and left arm were removed by peat milling and the torso was damaged but the mandible, teeth, ribs, clavicle, vertebra and other fragments were recovered nearby.

Unusually for an early Bronze Age burial the remains had indications of violent trauma. The arm had been broken by a blow, the spine was broken in two places and cuts to the back appear to have been inflicted with an axe. A radiocarbon date of 3678±31 BP (cal BC 2141-1960 BC) was obtained for the human remains and a second date of  3605±3o BP (2033-1888 BC) obtained for one of the hazel stakes. This makes the Cashel body the earliest fleshed remains found in a bog in Europe to date and would place the death of the young man into the early phase of the Bronze Age just at the stage that inhumations (2215-2095 BC), Bowl Food Vessels (2160 BC) and cists (2160-2065 BC) were coming into use in Ireland. In fact the posture closely resembles a contemporary burial in dryland. Grave 4 at Keenoge, Co. Meath, for example, contained a similar inhumation of an adult male, in a crouched position, lying on his right side aligned north-south in a simple pit in the ground (Mount 1997a, 13).

This discovery opens a new chapter in the record of Bronze Age burial in Ireland. Over 900 Irish Early Bronze Age (2200-1600 BC) burial sites are now known and at these sites people practised a wide range of burial forms in a range of different monument types. The use of megalithic tombs continued from the Chalcolithic and newly built cairns and earthen barrows or ring ditches also came into use. The largest single type of burial site known from the period are flat cemeteries consisting of graves dug into the ground that were either stone-lined cists or simple pits. The burial of the unburned remains of men, women and children developed and people could be inhumed in a variety of positions from extended to flexed, crouched and contracted. The remains could also be buried singly or in groups and be either articulated or disarticulated. Some of the graves contained surprisingly large numbers of burials. For example at Altaghderry Co Donegal a cist contained the remains of 10 individuals including 5 adults, identified as 2 men and at least 1 woman as well as 2 children under 7 years, one infant 7-11 months old and 2 foetuses less than 5 months (Halpin and Roche 2011). In the region where the Cashel body was found about 11% of the Bronze Age burials contained multiple burials (Mount 1997b, 156-7). One explanation for the multiple burials in cists and pits is that the graves were re-opened for later burials, and this appears to have been the case at sites like Carrig, Co. Wicklow (Grogan 1990). However at other sites, like Ballyveelish, Co. Tipperary where five individuals appear to have been cremated intact and buried simultaneously, burial of all individuals took place at one time (Doody 1987, 19). We should also be open to the possibility that the remains of individuals were stored until an appropriate moment and then interred in a grave at one time. Therefore Cashel Bog may not have been the intended final resting place for the young man but a temporary first stage resting place where the body lay, marked by the stakes, until the right moment when a final grave, a cist or pit, in a family cemetery or mound was made ready.