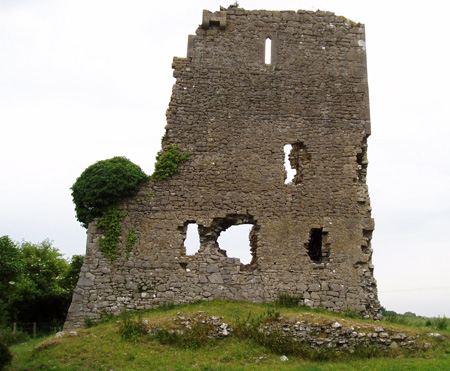 Carrick castle, Co. Kildare, the venue for the notorious O'Conor Faly murders in 1306.

The O’Conor Faly murders of 1306 were the most notorious and shocking of Medieval Irish history.

In 1306 one of the most notorious and shocking murders of Irish history was carried out by Sir Piers Mac Feorais Bermingham on the family of Murtough O’Conor Faly, King of Offaly. Piers Bermingham had agreed to act as god-father to Murtough’s nephew and Murtough, his brother and all the O’Conor Faly chiefs had attended a baptismal mass with the Berminghams at Carrick, Co. Kildare on the feast of the Holy Trinity. After the mass the whole party entered the Bermingham Castle at Carrick and it was here that Birmingham’s men attacked and killed Murtough and his entire family. Twenty-nine people are said to have been killed and then decapitated.

The O’Conor Faly sept or clan were descendants of the Uí Failge who were Kings of eastern Offaly (now part of Co. Kildare) and at times had been Kings of Leinster. When the Normans arrived in Kildare in the 1170s they had been forced out of their lands into the area of Offaly west of Tullamore. Here they had regrouped and at the end of the thirteenth century had risen against the English. Their most spectacular raid was in 1294 when they had captured Kildare castle and destroyed the records of the Lordship of Kildare.

Robert de Bermingham had taken part in the original Anglo-Norman conquest of Ireland and Strongbow, the leader of the expedition, had granted him the lands of the Uí Failge. His descendant Piers Bermingham was baron of Tothemoy, the part of north-east Offaly next to Co. Kildare. In 1289 he had been appointed by the King to guard the Marches or frontier of Leinster from Rathangan north to his barony of Tothemoy. This had placed the Berminghams and O’Conor Faly on a collision course and they had been at war intermittently since that time. In 1306 however there must have been a truce and the baptismal ceremony on the feast of the Holy Trinity was presumably intended to cement improved relations between the two frontier families. Perhaps a baptism could have been followed by a marriage alliance? What the O’Conor Faly didn’t know is that Piers Birmingham planned to use the occasion to administer the coup de grâce.

The murders took place at Carrick castle which is on the road from Edenderry to Kinnegad in western Co. Kildare. Carrick castle is actually a thirteenth century Hall-House, a rectangular three-story block with vaulting over the first floor that supported a main hall on the second floor. The Hall-House is situated conveniently next to a thirteenth century church and it was probably here that the baptismal ceremony took place with the after celebrations planned for the Hall-House. The murders were reported on extensively in the contemporary chronicles.

The Annals of the Fours Masters recorded that:

“O’Conor Faly (Murtough), Maelmora, his kinsman, and Calvagh O’Conor, with twenty-nine of the chiefs of his people, were slain by Sir Pierce Mac Feorais Bermingham in Mac Feorais’s own castle, by means of treachery and deceit.”

The fullest account was written in the Annals of Innisfallen:

“Muirchertach Ó Conchobuir Fhailgi and In Calbach his brother, were slain by Sir Piers Bermingham, after he had deceitfully and shamefully invited them and acted as god-father to [the child of] the latter and as co-sponsor with the other. Masir, the little child who was a son of the latter, and whom Piers himself had sponsored at confirmation, was thrown over [the battlements of] the castle, and it was thus it died. And twenty-three or twenty-four of the followers of those men mentioned above, were slain, for In Gaillsech Shacsanach (she was the wife of the same Piers) used to give warning from the top of the castle of any who went into hiding, so that many were slain as a result of those warnings. And woe to the Gaedel who puts trust in a king’s peace or in foreigners after that! For, although they had [the assurance of] their king’s peace, their heads were brought to Áth Cliath, and much wealth was obtained for them from the foreigners. “

As the Annals of Innisfallen indicate Bermingham was not punished by the King for the murders but instead received a sizable reward. In fact it is recorded in the Calendar of Justiciary Rolls of Ireland that on the 9th of June 1306 Bermingham and his accomplices appeared in the Royal Justiciar’s Court at Naas. They requested a payment for the beheading of felons. The individuals beheaded aren’t named but this undoubtedly refers to the O’Conor Faly and his family who been killed just weeks earlier. Bermingham was granted a £23 reward from the Royal treasury by the Justiciar. The suspicion is that this was a government sanctioned murder. But if its aim was to remove the threat to the frontier posed by the O’Conor Faly clan it failed and in fact hostilities recommenced immediately. The O’Conor Faly would continue to be a threat to the English province until the plantation of Offaly in the sixteenth century.