Razors, unlike most other types of metalwork, are as closely associated with their owners in death as they were in life. 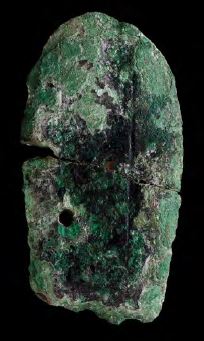 My report on a pair of bronze razors found in a pit burial at Peafield, Co. Limerick has just been published in River Road. The Archaeology of the Limerick Southern Ring Road. In this blog I am developing some additional thoughts about the Early Bronze Age razors with a new distribution map that includes the new finds. The discovery of the two Peafield razors and an example found in a house at Carrigatogher, Co. Tipperary, recently discussed by Michael Stanley (2013), now brings the total number of Bronze Age razors known in Ireland to just 47. Compared to some of the other artifact types of the period, such as the axes, razors are quite rare. They differ from axes in other ways as they are usually found in burials and never in hoards. In fact the interesting thing about the razors is that, unlike most other types of metalwork, they are as closely associated with their owners in death as they were in life. 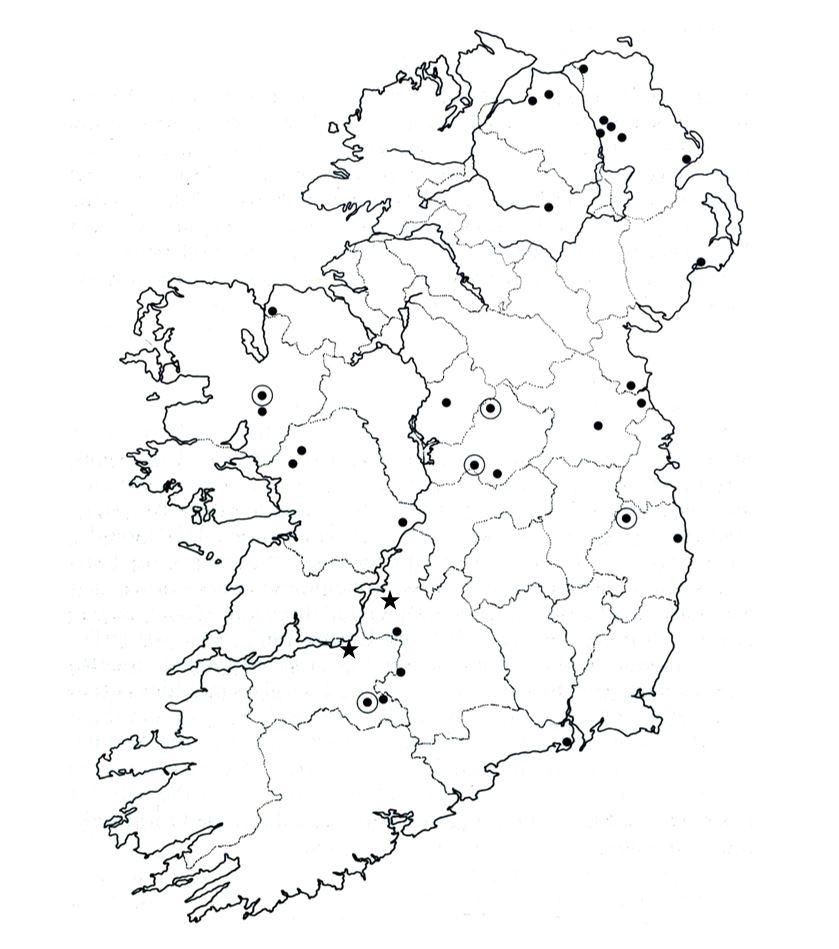 Fig. 2. The distribution of Earlier Bronze Age razors in Ireland. After Kavanagh 1991 with additions indicated as stars.

The razors indicate a fashion for the cutting of the beard and hair by some men. Harding (2008) in his paper on razors and male identify in the Bronze Age noted that a number of archaeologists have suggested that in continental Europe razors along with tweezers, spoons for applying make-up, and awls or needles for tattooing, formed toilet sets that were used by men for grooming. This special grooming was intended as a form of display by certain individuals and the association of the toilet sets with graves containing weapons indicates these men were probably warriors. The numbers of razors found in Ireland is quite small in comparison to continental Europe (see Kavanagh 1991 and Fig. 2) and none have been found associated with weapons, so there is no evidence that the Irish men who used razors were warriors. On the other hand razor matrices are found on moulds used to cast weapons such as spearheads, daggers and rapiers so that the razor owners certainly had access to weaponry (Kavanagh 1991, 82-3). Another possibility is that in Ireland razors were used by a small group of men to alter their appearance in order to differentiate themselves from their followers. I am going to call these men community leaders. When imagining the possible appearance of these men the ethnographic example of the Maori Chief springs to mind (Fig. 3). 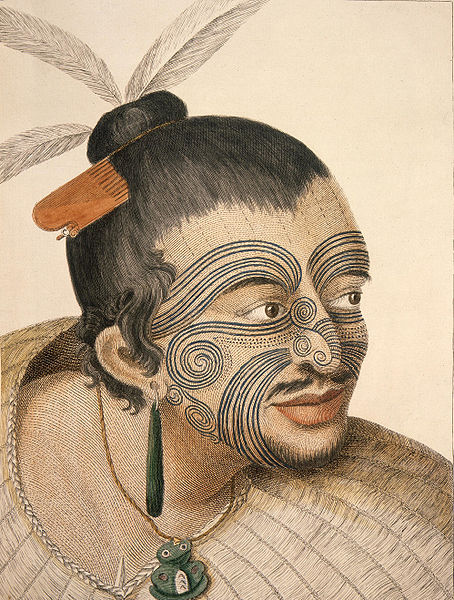 Razors were personal to their owners in a way that tools and weapons don’t seem to have been and their consistent association with pottery and sometimes with beads, pins, whetstones and flint, in marked contrast to weapons and tools, indicates that the razors were seen as a domestic item, associated with the home. Although razors could be refashioned from old daggers, once they came into the possession of an individual they may not have been inherited as they are usually found buried with the deceased, and sometimes burnt on a pyre, thereby putting them beyond use (Kavanagh 1991, 79).

The discovery of the house at Carrigatogher Site 3, Co. Tipperary allows us for the first time to look at the type of home associated with the people who had razors. Here a razor was placed into a post hole, along with sherds of two cordoned urns and burnt animal bone, during the construction of the house. This was not a loss or discard but a symbolically significant deposit. The Carrigatogher house at 6.7m x 7m in diameter was large for the period, and was constructed with a bedding trench for the wall and an internal circle of posts. The other significant thing about the house is the presence of a large D-shaped entrance porch constructed with posts and 2 lines of stakes curving around the house from the entrance (Mulcahy and Taylor 2013). The deposition of such a rare artefact type, at a period when metal is rarely found in houses, its occurrence in a symbolic deposit in a relatively large house with an unusually elaborate entrance suggests this may have been the home of a significant community leader.

Razors are a rare artefact type with a restricted distribution and deposition that were closely associated with their owners in both life and death. They are also the only metal artefact that provides a link between the social identity of a small number of men found in burials and a contemporary house type. Because of this the significance of the razors vastly outweighs their small number.

Kavanagh, R.M. 1991. A reconsideration of razors in the Earlier Bronze Age”, Journal of the Royal Society of Antiquaries of Ireland 121, 77-104. 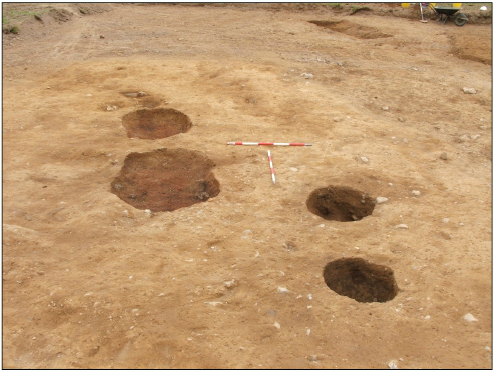 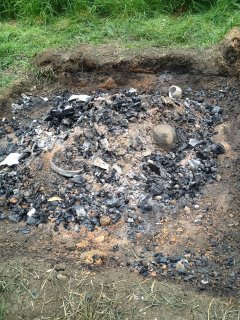 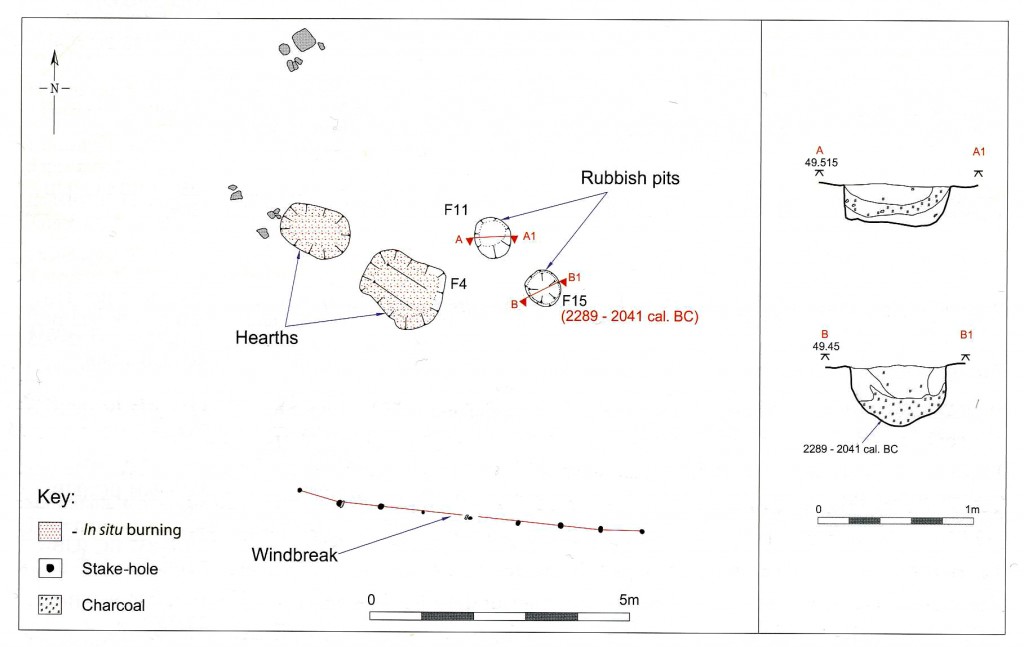