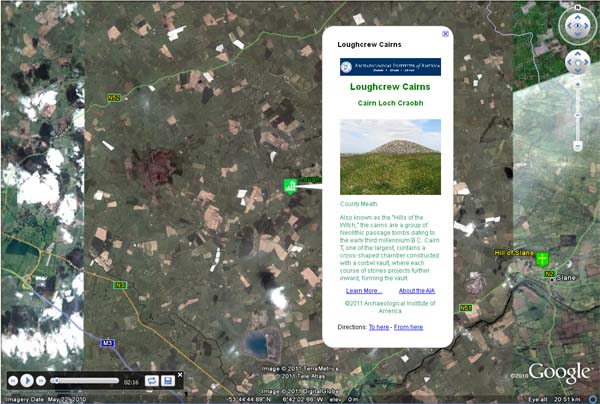 I read about the new Google Earth skin  on Jennifer Lockett’s blog http://jenniferlockett.wordpress.com/2011/05/05/google-earth-archaeological-heritage-map-of-ireland/ and decided to give it a try at the AIA webpage http://www.archaeological.org/news/aianews/ . Unfortunately the site states:“As you visit these sites, remember that each year hundreds of irreplaceable archaeological sites are destroyed by unrestrained development, looting, the vagaries of war, and environmental changes”. Whatever about the “unrestrained development”, Ireland hasn’t been at war for nearly 90 years and is one of the most peaceful places in the world. I hope this misplaced rhetoric won’t discourage any visitors to Ireland.

Laying that aside this is a useful Google Earth skin that looks forward to the exciting ways that Google Earth can be used to present cultural heritage to the public. I’ve been using it to generate distribution maps for a book I’m working on. The data downloaded to my computer very quickly and without fuss. Clicking on a site name in the places menu brings you smartly to the site you want and a cleverly designed window opens providing you information on the site. Clicking on learn more brings you to a window from Heritage Ireland.ie that provides copious information on getting to the site, opening hours, length of visit, admissions fees etc. This section is also usefully provided in seven European languages. This type of user friendly application is what the Irish Archaeological Survey should be moving towards and a comparison with the Sites and Monuments Database http://www.archaeology.ie/smrmapviewer/mapviewer.aspx (which was not working when I tried to access it for this review) is revealing. But the AIA Google Earth layer is not without its bugs. I found that the Passage Tomb cemetery at Loughcrew is marked in the wrong place, to the north-east of Wilkinstown, when it’s actually near Oldcastle many miles to the west (see the image above). But this shouldn’t detract from the usefulness of this application and the AIA is to be congratulated. 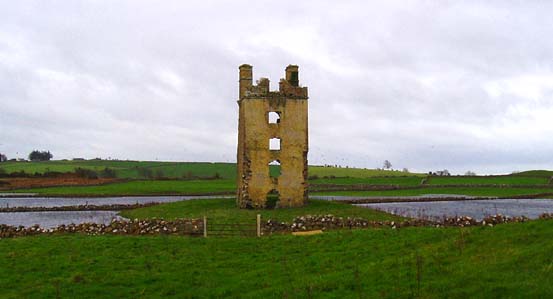 The cultural heritage of Ireland includes a wide array of monuments, objects, landscapes and structures that were produced by the inhabitants of Ireland over the last nine to ten thousand years. The Heritage Act 1995 defines the national heritage of Ireland as including monuments, archaeological objects, heritage objects, architectural heritage, flora, fauna, wildlife habitats, landscapes, seascapes, wrecks, geology, heritage gardens and parks and inland waterways. When we exclude the natural heritage categories such as flora, fauna, wildlife habitats, seascapes, geology and the natural inland waterways (but not the engineered examples) we are left with: archaeological objects, heritage objects, architectural heritage, landscapes, wrecks, heritage gardens and parks and engineered inland waterways such as canals. Landscapes are included because the landscape of Ireland, since the arrival of people in the Mesolithic and especially since the Neolithic farming revolution, has been totally altered by people and is now a cultural artefact.

Looking at each category of cultural heritage we see that each has its own definition, some more legally based than others. The legal definition of a Monument is defined in section 2 of the National Monuments Act 1930 as any a) artificial structure or group of structures, b) any cave, stone or other natural product, that has been carved, sculpted or worked upon or appears to have been purposely arranged, c) any part of any prehistoric/ancient tomb, grave or burial deposit, ritual, industrial or habitation site, and d) any place comprising the remains or traces of any structure, erection, cave, stone or natural product of any tomb, grave, burial deposit or ritual, industrial or habitation sites situated on land or in the territorial waters of the state. This definition is very broad and overlaps with a number of the other categories of cultural heritage such as architecture.

Archaeological objects are defined in section 2 of the National Monuments Act 1930 as “any chattel whether in a manufactured or partly manufactured or unmanufactured state which by reason of the archaeological interest attaching thereto or of its association with any Irish historical event or person has a value substantially greater than its intrinsic (including artistic) value, and the said expression includes ancient human, animal or plant remains”. The Irish State has legal ownership of all archaeological objects as a result of the Irish Supreme Court judgement in relation to the Derrynaflan hoard which was applied retrospectively to all archaeological objects found after the enactment of the Irish Constitution in 1922. Section 2 of The National Monuments Amendment Act (1994) gave the judgement a statutory basis.

Heritage objects are all portable examples of material culture that are not covered by the definition of archaeological object. This category can include agriculture tools, papers and archives, clothing, photographs, paintings, pottery, glass, etc.

Landscape comprises the visible features of an area of land, including physical elements such as landforms, living elements of flora and fauna, abstract elements like lighting and weather conditions, but from a cultural heritage viewpoint it is the human elements and the built environment that are most significant.

There are estimated to be about 15,000 shipwrecks lying in Irish coastal waters dating from the prehistoric to the modern period. These wrecks in turn contain archaeological and heritage objects. Notable examples include the remains of the Spanish Armada as well as the Lusitania.

Heritage gardens and parks refers to the historic gardens and designed landscapes that became a feature of the Irish landscape after the arrival of the Anglo-Normans in the twelfth century when demesnes were laid out around Lord’s manor houses. They became most common in the eighteenth and nineteenth centuries and are usually associated with country houses, although there a number of urban examples.

Engineered inland waterways include the canals such as the Grand Canal (Dublin to Shannon Harbour, Co. Offaly), the Royal Canal (Dublin to Cloondara, Co. Longford) and the Shannon Erne-Waterway (Leitrim to Lough Erne, Co. Fermanagh) as well as smaller examples such as the Boyne navigation (Oldbridge to Navan).