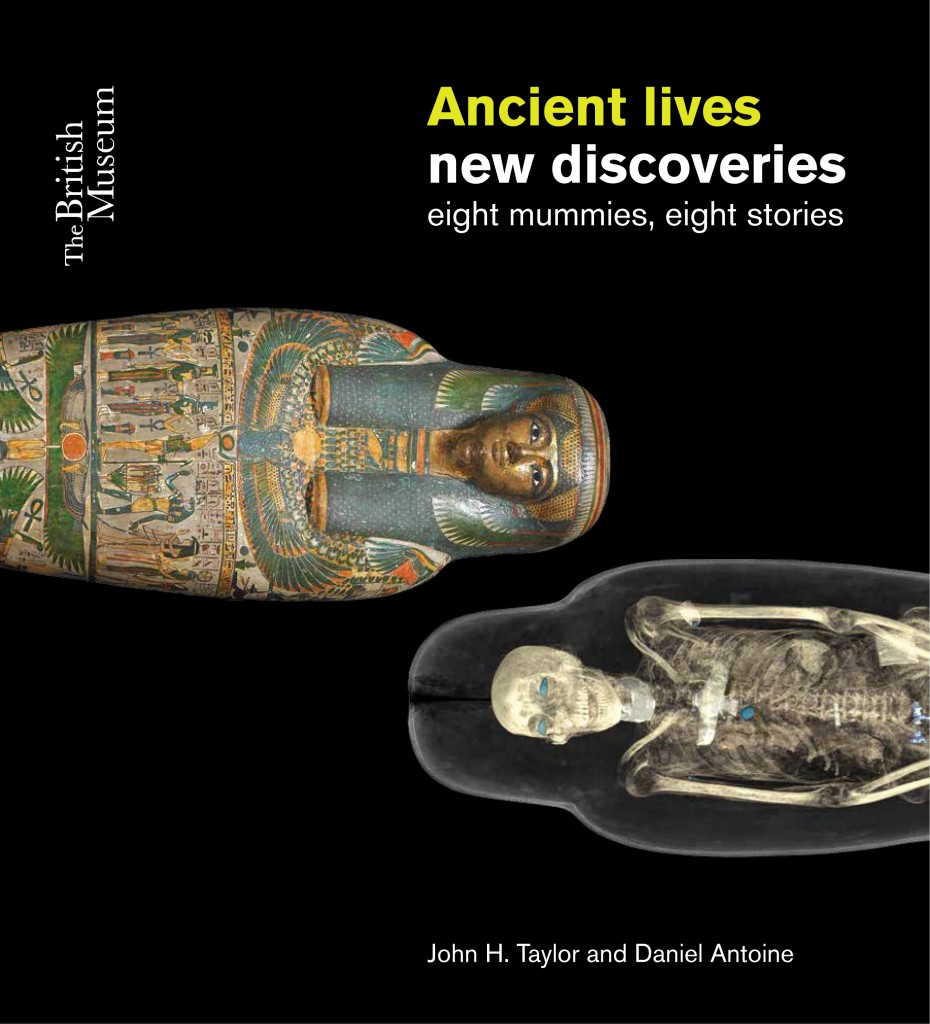 As a boy I was fascinated by mummies and whenever I was brought to a Museum I would insist on visiting the Egyptology section first. Of course after a while I began to notice the galleries were also filled with statutes, reliefs, pottery and much more, and from there my interest in archaeology developed. My interest in burials eventually lead on to my post-graduate research work on Bronze Age burials in Ireland. This is why I was delighted to receive a copy of John Taylor and Daniel Antoine’s Ancient lives new discoveries an investigation of eight mummies from the British Museum. John Taylor is the curator at the British Museum specializing in ancient Egyptian funerary archaeology and Daniel Antoine is the British Museum’s curator of physical anthropology.Their soft cover book is 192 pages long with a chronological table, map of the sites mentioned in the text, 209 colour illustrations, Bibliography and comprehensive index. The book has been written and published to accompany the exhibition Ancient Lives, new discoveries at the British Museum in London which runs until the 30th of November 2014.

This book is of great interest not only because it is about mummies, well written, profusely illustrated and beautifully produced, but because it demonstrates the groundbreaking results that can now be obtained through the use of non-invasive computerized tomography (CT) scanning. This technique produces 3D images of the mummies that allow the internal structures to be studied in situ and the remains to be virtually segmented into skin, muscle, bone, etc. as well as viewing through through vertical cuts. Another new technique known as Dual Energy CT scanning can provide additional information on material density so that the composition of artifacts on or within the mummy can be determined. The eight mummies that are the focus of the book range from c. 3,500 BC to AD 655-775 and are mostly old finds collected in the nineteenth century and taken into the care of the British Museum. Only the woman from from near et-Tereif in Sudan is a new find. The mummies represent a range of types from natural to embalmed mummies with men, women and children represented. Thanks to the curatorial policy of the British Museum the mummies have never been unwrapped and are well preserved. The new scanning techniques facilitate the non-invasive analysis of the mummies so that the age, gender and stature of the mummies can be established. The scans also provide a fascinating wealth of new information on health, diet and the embalmers arts, including their mishaps and quick fixes. 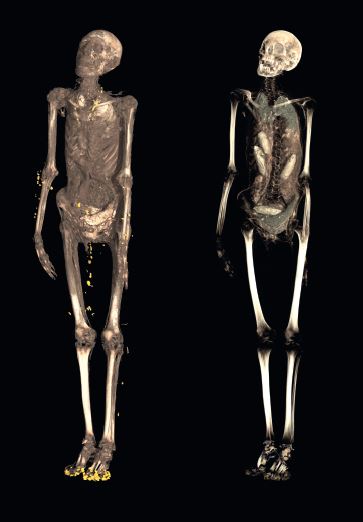 Scans of a mummy from the Roman period. From Ancient Lives new discoveries p. 139 courtesy of the British Museum.

The oldest body investigated are the remains of the naturally mummified remains of Gebelein Man B from Upper Egypt. Gebelein B dates to approximately 3500 BC, making him older than Ötzi the ice mummy in the South Tyrol Museum of Archaeology. This small young man was in his early twenties when he died. Remarkably his brain, lungs, kidneys and possibly liver and heart have survived. His digestive tract has also survived with what looks like his last meal. Analysis of small biopsies of these preserved organs will undoubtedly provide a wealth of new data about his health, diet and ancient human biology.

It is clear from the book that things didn’t always go according to plan in the embalmer’s workshop. An adult male mummy dating to about 600 BC from Thebes, which came to the Museum in a coffin belonging to someone else, a woman called Shepenmehyt, had extreme dental wear and multiple dental abscesses. The CT scan identified the remains of a small wooden implement lost by the embalmer in his skull cavity while removing the brain. More seriously a mistake made during the embalming of Padiamenet, the Doorkeeper and Barber of the Temple of Ra, appears to have caused his head to come off. The embalmers put it back on with the aid of two poles stuck inside his neck. Despite the possibility that this damage could have prejudiced Padiament’s chances of eternal life no ritual steps were taken to repair the damage of the loss of his head. To add insult to injury, his coffin was not made to measure and Padiamenet at 170cm was too tall to fit his coffin. The embalmers took the expedient step of placing Padiamenet’s mummy into the coffin with his feet protruding through the base and then wrapped them with linen. On another occasion a clay bowl was accidentally glued to the back of the head of the priest Nesperennub. The bowl was hidden by wrappings and the poor man has had to wear the bowl for the rest of eternity.

The embalming process took about 70 days to complete and involved the removal of the perishable parts of the body such as the brain and internal organs and the drying of the body. This was followed by the ritualized rebuilding process in which the nose and face were reconstructed, cavities filled with cloth and false eyes provided. The ritual required that embalming incisions be “healed” with small plates of metal or wax and other areas such as the nails could be gilded. The bodies were provided with amulets and wrapped in layers of linen and enclosed within coffins decorated with symbolic images. Tjayasetimu, a temple singer, was about 7 years old when she died but was buried in an adult-sized cartonnage case which unusually depicted her as alive. Child mummies, despite the high rate of child mortality, were very rare before the Roman period and those that have been found were usually members of high status families. Tamut, the Chantress of Amun at Karnak and daughter of a priest of Amun, was at least thirty years old when she died about 900 BC. The arteries in her legs were well preserved and contain calcified plaque deposits indicating that she suffered from atherosclerosis. Arterial plaque has been found in other mummies, such as Padiamenet, and suggests that cardiovascular disease was frequent in ancient Egypt.

Interesting results have also come from internal organs preserved in canopic jars. Histological analysis of lung tissue belonging to Henutmehyt, who died about 1250 BC, indicated that she suffered from the pulmonary diseases anthracosis and emphysema. The most recently dated body analyzed was the natural mummy of a Christian woman from near et-Tereif in Sudan dating to the seventh or eight century AD. Both of her lower canine teeth had been removed while she was alive and she had a tattoo of dots on the inner thigh of her right leg and very unusually a monogram of the Archangel Michael on her upper right thigh resembling the shape of a cross.

This book amply illustrates how much information the application of new scientific techniques can provide us about the people of the past. It also demonstrates how much old finds, when curated by institutions like the British Museum, still have to tell us. These human remains are a treasure trove of ancient human cultural and biological material that are providing us with new insights into human culture and biology thanks to the development and application of new scientific techniques.

My thanks to Hattie Clarke of the British Museum for sending me a copy of the book and sourcing the images for the blog post.