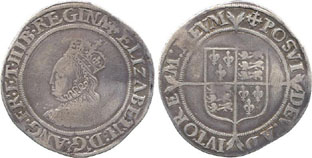 A shilling coin of Elizabeth I

Without access to banks, hedge funds or safe havens people in the past had no option in times of uncertainty but to bury their money in the ground.

In times of economic, military or political crisis when people face an uncertain future they will often take steps to protect their assets. Today this can be accomplished by selling risky assets such as sovereign bonds, withdrawing funds lodged with banks, buying gold or investing in a safe haven like Switzerland. END_OF_DOCUMENT_TOKEN_TO_BE_REPLACED 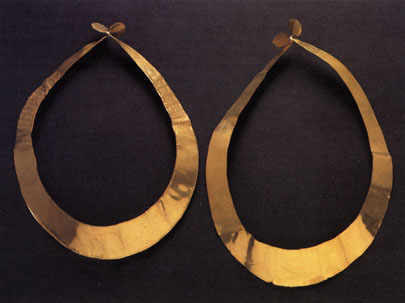 Throughout the Copper and Bronze Ages the deposition of hoards fluctuated through cycles of activity driven by religious, social and economic factors. After 1,500 years hoard deposition increased parabolicly in the last few centuries of the period indicating that the economy had boomed to the extent that people were wealthy enough to participate in an unprecedented process of wealth destruction. But this was followed by a complete halt to hoard deposition caused by economic collapse or social and religious changes or a combination of these factors.

In Ireland the use of metal commenced with the use of copper and gold from at least 2400 BC in the period known as the Copper Age and continued until the wide adoption of iron technology after 700-600 BC. One of the main themes of the Copper and Bronze Ages are hoards. Hoards are collections of objects that are buried together either in the ground or in bogs or other wetlands like lakes, marshes or rivers. Sometimes large collections of objects from bogs and wetlands that probably accumulated over time are also referred to as hoards. The study of the contents of hoards are important to our understanding of the Copper/Bronze Age as they record which objects were in use at a particular period, tell us about the production and distribution of objects and about contemporary society and religious practices. There are a number of different types of hoards including hoards of scrap metal for recycling and hoards of newly made objects for trade and distribution that were intended for recovery. Personal hoards are made up of sets of ornaments, tools or weapons that represented the personal property of an individual. These may have been deposited with the intention of recovery or they may have been intended as religious offerings never to be recovered. Finally there are large community hoards that are usually found in bog/wetland locations and were offerings deposited as part of religious ceremonies.

The record of hoards

There are more than 230 hoards known from the Copper/Bronze Age that contain more than 2,200 objects. Thirty-eight hoards are known from the Copper Age, 32 from the Early Bronze Age, just 5 from the Middle Bronze Age and 157 from the Late Bronze Age (O’Flaherty 1995, Eogan 1983 and 1994). One of the earliest hoards is the Castletown Roche hoard of four flat copper axes which were found close to the Awbeg River in Cork. Hoards continued to be deposited right into the seventh century BC and possible afterwards. In fact most of the known hoards were deposited in the period from the ninth century BC, known as the Dowris phase after a large bog/wetland hoard found near Birr, Co. Offaly. It was also in the Late Bronze Age that very large community hoards developed at bog/wetland locations like Dowris, Mooghaun, Co. Clare and the Bog of Cullen, Co. Tipperary. A trend throughout the Copper/Bronze Age was the deposition of hoards in bog/wetlands. About a third of the Copper and Early Bronze Age hoards, all the Middle Bronze Age hoards and about half the Late Bronze Age hoards are from bog/wetlands. The defining characteristic of these hoards is that they formed a part of religious ceremonies and were never intended to be recovered.

From the Copper Age, which commenced by 2400 BC or earlier, there are about 114 objects, mainly flat axes, gold discs and lunulae known from 38 hoards. Gold and copper were usually deposited separately. For example at Clashbredane, Co. Cork 25 flat axes were found in Raheen bog during peat cutting, while at Dunfierth, Co. Kildare 4 gold lunulae neck ornaments were deposited together in a bog. A few other objects like daggers and halberds are mainly found in the bog hoards. The objects in gold hoards were often in pairs and appear to represent personal objects.

After 2200/2100 BC copper was alloyed with tin to create bronze and the Early Bronze Age commenced. There are about 145 hoard objects known from 32 hoards in this period of over 600 years. There appears to have been a reduction in hoard deposition compared to the Copper Age. Axes were still the most common object included with a few daggers and halberds occurring in bog/wetland contexts. Gold disappeared from hoards and wasn’t deposited again until the Late Bronze Age.

After 1500 BC the Bronze Age moved into its Middle phase and hoard deposition went into a further decline. Only three hoards with just 11 objects are known mainly from bog/wetlands in the north-west. These included Spears for the first time with flanged and palstave axes.

After 1300/1200 BC, in the period known as the Bishopsland phase, gold hoards reappeared for the first time since the Copper Age. Twenty-five hoards of mainly personal ornaments are known that include 130 objects such as torcs, bracelets, rings, ear-rings and hair-rings that were made of gold and were mostly deposited in dry land hoards. The gold objects were all international types that are found throughout Britain, France and Spain. These were the personal property of individuals but appear to have been selected and buried for some special social or religious purpose rather than just concealment.

After 1000 BC there was another brief period of decline in hoard deposition during what is known as the Roscommon phase of the Late Bronze Age. Only 3 hoards containing more than 200 objects are known from this period. The most important find from the period the Roscommon hoard contained more than 200 pieces of broken and possibly scrap bronze. The objects in the hoards are primarily swords, spearheads, axes and other tools.

After 900 BC during the Dowris phase the Bronze Age reached its finale. It is not entirely clear how long this period lasted. There is evidence that iron working had been introduced to Ireland sometime between 800-700 BC. So for part of the Dowris phase both bronze and iron were in use simultaneously. From this short period more than 130 hoards are known containing more than 1,600 objects of bronze, gold, amber, glass, etc. These two or three hundred years saw over three times more objects deposited in hoards than in the proceeding 1,500 years. These hoards also contained the widest range of objects of the Bronze Age with tools such as axes and gouges, weapons such as swords and spear-heads, and razors, rings, containers, musical instruments and personal ornaments and gold rings and gorges, and beads of glass and faience. Most of the hoards are known from bog/wetlands and a number of them like Dowris, Cullen and Mooghaun each contained more than 200 objects which appear to have been deposited over a number of years.

The parabolic increase in hoard deposition indicates that during the Dowris phase the economy had boomed to the extent that many people were wealthy enough to participate in an unprecedented process of wealth destruction through the offering of valuable objects to the gods at ceremonies mostly centred on sacred bog/wetland sites. The large community hoards like Dowris and Mooghaun contained a wide range of objects from cauldrons and swords, to musical instruments, tools and ornaments. These hoards may be the accumulation of annual or episodic ceremonial offerings. There were also hoards of ornaments like the example from a bog at Kilmoyly, Co. Kerry with its gold bracelets and dress fastener deposited in a wooden box. These hoards represent an offering on behalf of wealthy individuals. There are weapon hoards like the example from wetland at Ballycroghan, Co. Down with its three leaf-shaped swords. The weapon hoards probably represent the offerings of individual chieftains. There are also tool hoards like the example from Crossna, Co. Roscommon with socketed axes, a gouge and knife, which probably represent the offerings of wealthy farmers.

The mechanisms behind these wildly fluctuating rates of hoard deposition are still poorly understood. If hoards were being buried as a means of concealment and safekeeping with the intention of recovery we would expect to have found much larger numbers of hoards from the Middle Bronze Age and the early part of the Late Bronze Age and would expect to find gold hoards throughout the period. Instead what we are seeing are cycles of fluctuations in hoard deposition that were driven by religious, social and economic factors. The phases may have lasted for hundreds of years but could have been shorter. The activity also took place at different social scales from the community to the individual level but each would have taken place within a defined social and political context. Some time probably between 600 and 500 BC the deposition of hoards ceased completely as a result of economic collapse or social and religious changes or a combination of these factors. This could have been a slow process or an abrupt collapse in activity. The production and use of bronze alongside iron continued in the succeeding Iron Age but was never again to reach the same scale.

Clarke, D.V. et al. 1985. Symbols of Power at the time of Stonehenge. Edinburgh.

Eogan, G. 1994. The Accomplished Art. Gold and Gold Working in Britain and Ireland during the Bronze Age. Oxford.

O’Flaherty, R. 1995. An analysis of the Irish Early Bronze Age hoards containing copper or bronze objects. Journal of the Royal Society of Antiquaries 125, 10-45.