The range of mosquito species Anopheles Claviger (Meigen) in grey from diptera-culcidae.0catch.com

I am spending this summer writing a book on Ireland in the Bronze Age and at the moment I am working on a section on human health. The evidence from cemeteries where there is adequately preserved skeletal material, and these remains have been analysed for pathology, indicates that there was widespread iron-deficiency anaemia amongst the population, both children and adults. These deficiencies present in the preserved bone as porotic hyperostosis and cribra orbitalia while dental hypoplasia indicates acute infection and fever. So far I have noted instances in a dozen cemeteries in Connacht, Leinster, Munster and Ulster and there are probably more. Usually in the reports these diseases are interpreted as indicating a population that was poorly adapted to its environment or was under nutritional stress.

However I know from the sections that I have written on settlement and farming that today the areas in which these cemeteries are found are amongst the most fertile regions of Ireland and the fields surrounding these cemeteries, if not built on, are used to fatten cattle and grow cereals. When I look at the archaeological and palynological evidence for agriculture it indicates that Early Bronze Age farming was generally small-scale and often carried out in in clearings in the forest close to water that were restricted to the lighter and better drained lowland soils (Weir 1995). These clearings were laboriously made by hand to provide grazing land for cattle and pigs with some sheep and horses. There was some cereal cultivation of both wheat and barley but this appears to have been on a limited scale although preserved wheat and barley has been found at a number of settlement sites. The resources of the surrounding forest were also used and hazel nuts, wild apples and berries were collected. The farmers also hunted and the remains of red deer, wild boar and hare have been found at settlements.

The pollen evidence indicates a gradual clearance of forest surrounding the settlements. For example at Roughan Hill, Co. Clare a system of irregularly-shaped fields enclosed by stone walls was laboriously cleared from the forest and contained dispersed houses within enclosures and family tombs covering an area of about 144 hectares (Note Roughan Hill is now dated to the Early Bronze Age see Jones 2008). An area this size might have produced 200-300 cattle annually as well as some cereals and there were all the resources of the surrounding forest. Settlements of the period were usually small scale consisting of just one or two houses for perhaps a single family group. The skeletal remains of the farmers tell the story of the hard work of cutting down trees, removing stones from fields and building stone walls. Many people suffered from injured backs with Schmorl’s nodes, periostitis, degenerative joint disease and osteoarthritis. In my view the archaeological evidence suggests that the Early Bronze Age people were quite well adapted to their environment and don’t appear to have been outstripping the available resources. So I am not happy with widespread nutritional stress as an explanation for the anaemia.

An alternative explanation is that a low level of iron in the blood may be a defence against pathogens. During infection iron is sequestered in the liver, which prevents invading pathogens from getting adequate supplies of this vital element. If these people were being affected by a pathogen it would have to be one that could spread to small-scale low-density communities living close to rivers, lakes and bogs. Diseases like Typhus usually require a higher density of settlement to spread, however mosquito-borne pathogens are a possibility. Recent investigations of Egyptian Royal mummies, for example, have identified the DNA of Plasmodium falciparum, the malaria parasite in association with porotic hyperostosis, so the anaemia could be indicating malaria (Nerlich et al. 2008).

Although Ireland no longer has any mosquito-borne pathogens, it did in the past. Irish mosquitoes are known to have spread tertian malaria (Plasmodium vivax) and the last major outbreak occurred in Cork in the 1840s, 50s and 60s. As well as malaria mosquitoes also have the potential to spread yellow fever, dengue fever and encephalitic viruses. Today Ireland has 18 species of mosquitoes of which four are Anopheles (including Anopheles Claviger (Meigen)) the potential carriers of malaria. Although mosquitoes have not been recorded in archaeological or palaeoenvironmental samples they occur throughout Europe and were first scientifically recorded in Ireland in 1823 (Ashe et al.1991). From the environmental perspective during the Early Bronze Bronze Age the climate is thought to have been 1-2° warmer than today and provided a satisfactory environment for mosquitoes to breed. In fact the Irish climate is still viable for mosquitoes and some health workers fear that climate change could see the re-emergence of malaria in Ireland in the future.

So an alternative hypothesis to the suggestion that all the iron-deficiency anaemia seen in Early Bronze Age remains is caused by nutritional deficiency could be the presence of a pathogen or pathogens that triggered the anaemic reaction as a defence mechanism. This pathogen could have been malaria which was present in Ireland in the nineteenth century. In this scenario the opening up of the forest canopy close to rivers, lakes and bogs altered the ecology and provided new habitats for mosquitos to colonise. The increased populations of mosquitoes bred in close proximity to humans and spread malaria or other pathogens that caused the anaemic reaction. Although there is currently no direct evidence for mosquito-borne pathogens in the Bronze Age Ireland I think this is a useful hypothesis that is worth further consideration and testing.

Ashe, P., O’Connor, J.P. and Casey R.J. 1991. Irish mosquitoes (Diptera: Culicidae): a checklist of the species and their known distribution. Proceedings of the Royal Irish Academy, Vol. 91B, 21-36. 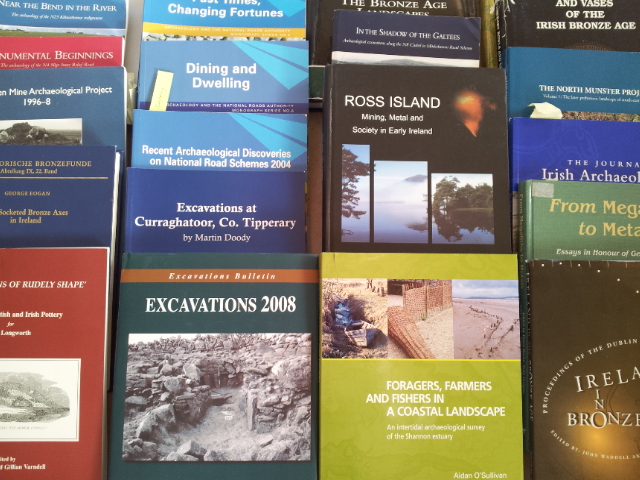 Author requests help from the public in writing a book.

Those of you who have been following this blog or have been a recipient of my emails from time to time are aware that I’ve been collecting material for a book on the Irish Bronze Age. For the last number of years I have been collecting, collating and digesting the many hundreds of reports of Bronze Age sites excavated in Ireland. My thanks go to everyone who has allowed to me to read their reports in advance of publication. END_OF_DOCUMENT_TOKEN_TO_BE_REPLACED