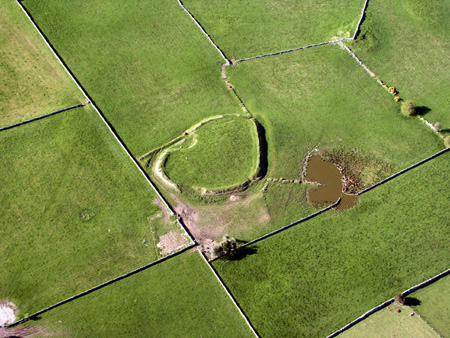 A ringfort forms part of a field boundary near Cam, Co. Roscommon.

The Irish Government has unveiled its approach to amending the Environmental Impact Assessment system to comply with the European Court of Justice ruling C-66/06. The new regulations will require more land restructuring and water management projects be scoped and environmentally assessed.

In November 2008 the European Court of Justice in the case of the European Commission versus the Republic of Ireland (ECJ C-66/06) ruled that Ireland had not adopted all measures to ensure that projects likely to have significant effects on the environment that belong to categories 1a (projects for the restructuring of rural land holdings), b (projects for the use of uncultivated land or semi-natural areas for intensive agricultural purposes); and c (water management projects for agriculture, including irrigation and land drainage projects) of Annex II of Environmental Impact Directive 85/337/EEC (amended by Directive 97/11/EC) were assessed for environmental impacts before consent was given. See the full judgement here .

The court ruled that by setting thresholds which take account only of the size of projects – to the exclusion of the other criteria laid down in Annex III to Directive 85/337 such as:

and by not providing for project screening, Ireland had exceeded the limits of its discretion under Articles 2(1) and 4(2) of the Directive and had consequently not adopted all necessary measures to ensure that projects likely to have significant effects on the environment are made subject to a requirement for development consent and to an assessment of their environmental effects in accordance with Articles 5 to 10 of the Directive.

The significance of this for cultural heritage is that the European Court noted that Irish studies had established a risk of accelerated destruction of archaeological remains directly connected with projects for the restructuring of rural land holdings and land drainage projects. In fact Archaeological Features at Risk (O’Sullivan et al. 2001), published by the Heritage Council, had found that land improvement (the removal of field boundaries and ditches) and drainage were the overwhelming causes of loss of field monuments in Ireland. The report also found that with the increasing intensification of Irish agriculture the rate of monument loss was increasing.

In response to the judgement the Minister for the Environment and Local Government and the Minister for Agriculture, Fisheries and Food have jointly produced new regulations – the Planning and Development (Amendment) (No.2) Regulations 2011 and the European Communities (Agricultural Environmental Impact Assessment) Regulations 2011 – to bring Ireland into compliance with the principles and requirements of the Environmental Impact Assessment Directive.

The new Planning and Development (Amendment) (No.2) Regulations 2011, transfer responsibility for most of the activities covered by the ECJ C-66/06 judgment, such as the re-structuring of fields and removal of boundaries, the use of uncultivated land or semi-natural areas for intensive agriculture and normal field drainage works, to a new consent system that will operate under the aegis of the Department of Agriculture, Fisheries and Food.

The new Department of Agriculture, Fisheries and Food regulations cover the following categories of development:

propose a new system of screening, to be undertaken by the Department of Agriculture, for environmental impact above certain thresholds for different types of agricultural activity, and the requirement for mandatory Environmental Impact Assessment to be carried out on such projects at a higher level.