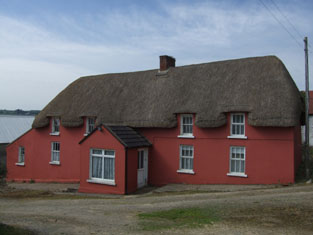 The Irish landscape is characterised by its heritage buildings and structures, some of which are protected from demolition in the County Development Plans. Although the Environmental Impact Directive (85/337/EEC amended by 97/11/EC) requires the identification, description and assessment of material assets and the cultural heritage, and buildings and structures are part of the cultural heritage, the demolition of buildings and structures in Ireland has not been considered within the Environmental Impact Assessment (EIA) process unless the proposed development itself came within the scope of EIA. The Planning and Development Regulations 2001 state that building demolition is an exempted development (Class 50) except in cases where the building is a habitable house, forms part of a terrace of buildings or abuts on another building in separate ownership. In these cases the demolition will require planning permission but not an Environmental Impact Assessment. Therefore a significant heritage structure, that has not been designated, can be demolished without any assessment and if unoccupied, without any planning permission. However, this situation will soon change.

In March of this year the European Court ruled in case C-50/09 the European Commission vs. Ireland that Ireland had failed to fulfil its obligations under the Environmental Impact Assessment Directive as it had (amongst other things) excluded demolition works from the scope of legislation transposing the Directive into Irish Law. In other words demolition of a significant heritage building or structure where the works would constitute a significant impact on cultural heritage should have required an Environmental Impact Assessment all along.

Now the Department of the Environment, Community and Local Government must frame new legislation to give effect to the decision of the European Court.  An important consideration in framing the new legislation will be how to come to a decision as to whether a structure proposed for demolition should be the subject of an EIA. The first approach would be to require all structures designated as Protected Structures in the County development Plans or that have been included in the National Inventory of Architectural Heritage to undergo EIA before demolition. However not all significant heritage structures have been designated or included in the National Inventory of Architectural Heritage and the Architectural Protection Divison of the Department of Arts, Heritage and the Gaeltacht regularly request that EIAs assess non-designated structures in the vicinity of proposed developments.

An additional approach would be to set a size threshold. This is currently how most development types are judged to have a significant environmental impact and come within the scope of EIA. For example a forestry application over 50 ha will require an EIA but one under will not. However, significant heritage structures come in a variety of sizes. For example Wicklow Co. Council has designated a J.W. Penfold post box dating from 1870 in Carrigoona Commons as a protected structure. Similar structures would not be included in EIA under a threshold system based on size.

Another approach would be to set a threshold date range for structures coming within EIA. However, significant heritage structures may date from any period. For example Archer’s Garage in Dublin City, a listed building, was built as recently as the 1940s. Setting an age threshold would include many but not all heritage structures.

The only foolproof method of ensuring that all significant heritage structures are included in EIA will be to carry out a formal recorded screening of each structure proposed for demolition. This will generate a lot of reports so the numbers requiring screening could be reduced by introducing thresholds based on age and scale noted above as long as the screening is carried out on all structures outside the thresholds.

The decision of the European Court has dramatically changed how the demolition of structures in Ireland is to be assessed. It is now up to the Government to introduce the necessary legislation to give effect to the judgement.