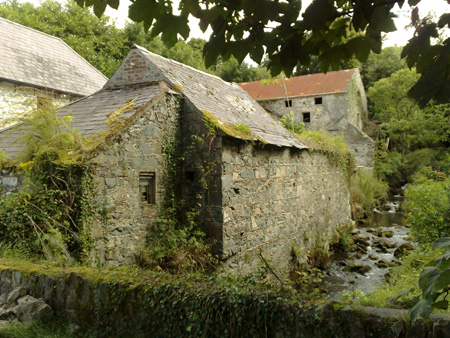 Monuments like this county Wexford mill could lose all legal protection if post-1700 sites are removed from the Record of Monuments and Places.

In recent weeks the Record of Monuments and Places, which since the mid-1990s has in combination with the Planning and Development Acts been the basis of monument protection in Ireland, has become the focus of attention as a result of a review of the Record being carried out by the Department of Arts, Heritage and the Gaeltacht.

The Record of Monuments and Places (RMP) was established under section 12 (1) of the 1994 National Monuments (Amendment) Act and provides that the Commissioners (now the Minister) shall establish and maintain a record of monuments and places where the Minister believes there are monuments, such record to be comprised of a list of monuments and relevant places and a map or maps showing each monument and relevant place in respect of each county in the state. Section 12 (2) provides that the record shall be exhibited in each county. Section 12 (3) provides that when the owner or occupier of a monument or place which has been recorded under subsection 12(1) or any person proposes to carry out, or to cause or permit the carrying out of, any work at or in relation to such monument or place, he shall give notice in writing of his proposal to carry out the work to the Commissioners (now the Minister) and shall not, except in the case of urgent necessity and with the consent of the Commissioners (now the Minister), commence the work for a period of two months after having given the notice.

The Record is essentially a notification mechanism that functions mainly through the planning system (through policies included in the County Development Plans) to alert the National Monuments Service and other third party planning consultees to development proposals that have the potential to impact monuments in the Record. Steps can then be taken to assess any impacts and have them mitigated as appropriate.

Removal of Monuments from the Record

The legislation establishing the Record has only these three sections and there is no mechanism included in the Act for the removal of a monument, nor has a mechanism been included in any subsequent amendments. In effect once a monument has been placed on the record, as long as it still physically exists, there are no legal grounds for removing it from the Record.

The Definition of a Monument

The definition of a monument is found in section 2 of the National Monuments Act 1930 and includes any artificial or partly artificial building, structure, or erection whether above or below the surface of the ground and whether affixed or not affixed to the ground and any cave, stone, or other natural product whether forming part of or attached to or not attached to the ground which has been artificially carved, sculptured or worked upon or which (where it does not form part of the ground) appears to have been purposely put or arranged in position and any prehistoric or ancient tomb, grave or burial deposit, but does not include any building which is for the time being habitually used for ecclesiastical purposes. There is no date involved in the legal definition of a monument; therefore a monument may be of any date.

The definition of a National Monument is also found in section 2 of the National Monuments Act 1930 and refers to a monument or the remains of a monument the preservation of which is a matter of national importance by reason of the historical, architectural, traditional, artistic, or archaeological interest attaching thereto and also includes (but not so as to limit, extend or otherwise influence the construction of the foregoing general definition) every monument in Saorstát Eireann to which the Ancient Monuments Protection Act, 1882, applied immediately before the passing of this Act, and the said expression shall be construed as including, in addition to the monument itself, the site of the monument and the means of access thereto and also such portion of land adjoining such site as may be required to fence, cover in, or otherwise preserve from injury the monument or to preserve the amenities thereof.

Again there is no date provided in the definition. But the emphasis on historical, traditional and artistic traits clearly indicates that the framers of the Act had in mind that structures of recent historical date could be classified as National Monuments. Indeed a number of post-1700 structures were in fact acquired by the state and preserved as National Monuments. These include monuments such as Michael Collins’ birthplace, Eamon de Valera’s Cottage and Seán Mac Diarmada’s House.

The Minister for Arts, Heritage and the Gaeltacht stated in the answer to a Parliamentary Question on 20th September that:

“My Department is currently examining the recording of post-1700 AD monuments with a view to formulating policy and criteria for including them in a revised and updated Record of Monuments. The objective of the review is to achieve a standard approach nationally that will ensure that all elements of the built heritage continue to be adequately protected. (Question No. 312, Ref No: 25004/11)”

In a press statement issued on the 21st September 2011 entitled “Deenihan Confirms Post 1700 AD Monuments Will Continue to be protected”, the Minister stated:

“There is no question of the current Record of Monuments and Places being revised until we have completed the review” he added. “When draft policy and criteria for updating the RMP have been developed, the Department of Arts, Heritage and the Gaeltacht will consult with interested parties before any decisions are made.”

It is to be sincerely hoped that following the review of the Record of Monuments all elements of the built heritage will continue to be adequately protected as the Minister has said.

How many archaeological sites are there in the Republic of Ireland? This is an obvious question but not an easy one to answer. If we consult the statutory Record of Monuments and Places (RMP) established under the National Monuments Act (1930-2004) the answer is about 140,000 (http://www.archaeology.ie/ArchaeologicalSurveyofIreland). But we now know that the RMP only lists a fraction of the potential surviving sites. During the Celtic Tiger period (1995-2008) thousands of previously unknown sites were identified during the course of development. This is because archaeological remains may be buried beneath the ground or later structures and are not visible to the naked eye. Archaeological remains that are standing above ground may be obscured by overgrowth, may be covered by later structures or may have been partly removed or altered to make them unrecognisable. Archaeological remains that are standing above ground may be in plain view but may not have been recognized or mapped or noted in surveys or reports.

So how many sites are there? A quantitative approach would appear to be the most useful approach to answering the question. The land area of Ireland is 6,888,900 hectares (ha), dividing this by the roughly 140,000 sites included in the RMP results in a ratio of one site per 49 ha. Using this as a starting point the general number of potential sites can be estimated by using information now becoming available from the recent large-scale archaeological investigations of infrastructure projects like motorways and pipelines. All the large-scale infrastructure projects developed during the Celtic Tiger period have resulted in the discovery of large numbers of archaeological sites. For example the Bord Gáis “Pipeline to the west” construction corridor was 335 km long and impacted an area of 1,005 ha. During the course of the development 190 previously unknown archaeological sites were identified, one site per 5.3 ha (See Grogan et al. 2007, 5- 9). Similarly, during the construction of the Cork to Dublin gas pipeline 96 monuments were impacted over a distance of 222 km, an area of 489 ha, one site per 5 .1 ha (See McQuade et al. 2000, xiii). During the construction of the M8 Motorway from Ballycuddahy, Co. Laois to Dunkettle, Co. Cork 249 sites were indentified in an area of 1,494 ha, or one site per 5.6 ha (Also McQuade et al. xiii).

Using these figures we can calculate an average ratio of sites to hectares of one site per 5.6 ha. Scaling this up to the total land area of the Republic  suggests that as many as 1.23 million sites potentially remain to be identified. Of course the infrastructure projects tended to be situated in the fertile lowland areas, where sites cluster, and sites may be potentially less likely to be found in upland areas, so this figure should be adjusted a little. However, these comparisons suggest that the RMP represents somewhere around 11% of the total potential sites. These quantitative figures suggest on the one hand that almost any development has the potential to impact archaeology with those impacting 5.6 ha or more approaching an almost certainty. The risk of impacting archaeology cannot be ruled out without the deployment of field-based assessment methods such as archaeological testing or geophysical investigation. On the other hand acknowledging that there are probably more than a millions potential sites should cause archaeologists to question some of their assumptions about managing the resource.

Grogan et al. 2007. The Bronze Age landscapes of the pipeline to the west. Dublin, Wordwell.

McQuade et al. 2009. In the shadow of the Galtees: archaeological excavations along the N8 Cashel to Mitchelstown Road Scheme. Dublin. NRA Scheme Monographs 4.

Mount, C. There are a lot more archaeological sites in the Republic of Ireland than we thought. The Charles Mount Blog, May 18, 2011. http://charles-mount.ie/wp/?p=18