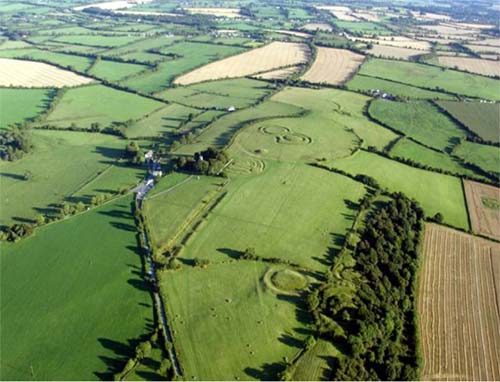 Aerial view of the Hill of Tara, Co. Meath, Ireland.

The creation of continuity

Throughout history people have built, copied and added to monuments according to the needs of the day. These alterations, emulations and additions draw on the histories and mythologies of the old monuments and the places and landscapes in which they are situated and recreate them to suit a new narrative. Richard Bradley (1987) drew on the ideas of Maurice Bloch (1977) concerning the use of the past in the present and Eric Hobsbawn’s (1983) concept of the invention of tradition (where practices of a ritual or symbolic nature seek to instil values and norms which imply continuity with a suitable past) to suggest that the use of the ritual past is one way in which groups establish their own political positions and put these positions beyond challenge. The past becomes a resource in the hands of the living who may legitimate their position through the promulgation of origin myths. Bradley suggested that the past was also re-used through the strategic use of old monuments that were incorporated into a new landscape. He called the appropriation of meaning held in the mythology of old monuments the creation of continuity.

The appropriation of continuity

Created and appropriated continuities in the landscape

There are a number of landscape locations in Ireland with prominent monument complexes that were re-used and recreated at various periods. The re-use of old sites and ancient monuments represents more than simply a continuity of practice, but a conscious decision to use sites that would have had an established significance, mythological identify and landscape prominence. The occurrence of this re-use at a number of sites indicates preoccupation with forging links with the past, to draw on or recreate the past in order to support emerging social or political developments by creating a new continuity.

The greatest concentration of conjoined barrows (prehistoric burial monuments) in Ireland is found on the Hill of Tara in Co. Meath, where they occur in five of the six main barrow groups. The barrows groups at Tara represent the continuation and elaboration of Early Bronze Age lineage groups through the Late Bronze Age and Iron Age (Mount in press). As the Tara barrow groups developed, lineages could be spatially and historically linked and be seen to descend from remembered ancestors and the grouping of barrows reflect both the links and tensions between ancestral lineages reflected within the groupings Cooney (2009, 379). The practice of physically conjoining a new barrow to an old one and encompassing old barrows into new monuments was probably intended to link lineages together or emphasise an existing, a new or a falsely created lineal descent.

The conjoining of barrows and other earthworks during prehistory indicates that at times it was important to physically link a new monument to an existing one. This expressed a physical relationship between the new and old monument so that the new and old became one. In the case of barrows this symbolically linked those commemorated by the later monument to the earlier one. The emergence of conjoined monuments and the preoccupation with old sites and monuments are all related to the creation of continuity. Emulating, re-using and recreating old monuments is characteristic of groups creating history to suit contemporary needs. Building a barrow to resemble and emulate an ancient monument with associated mythology signals that a group is similar to or even descended from the mythological figures of old. Building a new monument that physically joins or encompasses another goes beyond emulation and represents the attempt to annex, appropriate or even eclipse the symbolic, familial or social associations of the earlier monument.

The concept of created continuity provides us with insights into the development of prominent monuments complexes in the landscape. The concept of appropriated continuity allows us to explore the nature of the relationships being created. The former strategy looks to the formation of a new political or social order using the past as a frame of reference. The latter strategy is about establishing direct relationships within a political or social system and is involved with the creation of lineage and descent relationships. In lineal descent groups conjoining monuments is a way of promoting a more distant relationship or supporting an entirely fictitious one and is an attempt to appropriate continuity with the earlier monument.

Mount, C. (In press a). Created and appropriated continuity at Rathdooney Beg, Co. Sligo. In C. Corlett and M. Potterton  (eds) Life and Death in the Iron Age in Ireland.

Mount, C. (In press b). The context of the Early Bronze Age cemetery in the Mound of the Hostages, Tara, Co. Meath. In M. O’Sullivan at al. (eds) Tara from the Past to the Future.