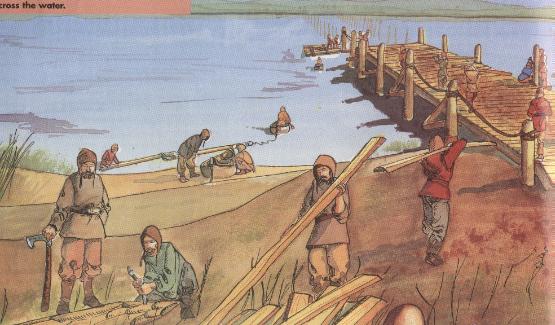 Artist's interpretation of the building of the Medieval bridge at Clonmacnoise, Co. Offaly. Drawing by Mark Offutt, of Discovering Archaeology

One of the areas often omitted from historical and archaeological accounts of Medieval Ireland are bridges. Standard reference works make no mention of bridges and few articles on individual bridge sites, apart from the find at Clonmacnoise, have appeared. It has been assumed that most travel required the fording of rivers at crossing points referred to as Áth in Irish. However, analysis of the Irish Annals, manuscripts written by monastic scribes who chronologically recorded notable events, indicate that there were bridges throughout Ireland in the Medieval period, built both by the native Irish and by the later Anglo-Norman settlers. The large number of bridges suggests that the prevailing view of Medieval transport and travel needs to be revised. 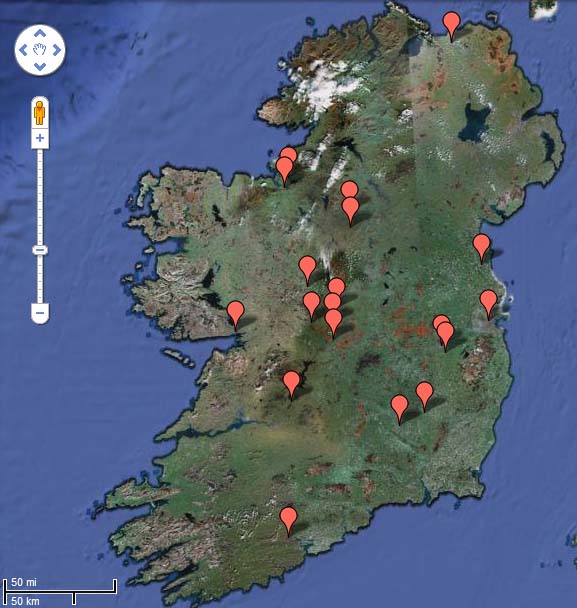 The distribution of Medieval Bridges mentioned in the Irish Annals.

The earliest mention of a bridge is in 924 AD at Cluain-na-gCruimhther (Cloone) Co. Leitrim where Muircheartach O’ Niall defeated a force of Vikings. However the archaeological survey of the bed of the river Shannon at Clonmacnoise identified a bridge which was dated earlier to 804 AD. Examination of timbers in other river beds will probably push this date back even further. Bridges are recorded at the rivers Shannon, Bann, Suck, Lee, Garravogue, Liffey, Yellow, Corrib, Barrow, Nore, Ballysadare, Avonmore and possibly the Brosna or Silver rivers. The bridges were built at Cloone, Co. Leitrim, Athlone, Co. Westmeath, Shannon Harbour and Clonmacnoise, Co. Offaly, Ballinasloe, Co. Galway, Athleague, Co. Roscommon, Cork City, Sligo town and Ballysadare, Co. Sligo, Dublin City, Newbridge, Co. Kildare, on the River Corrib near Galway, on the Yellow River near Ballinamore, Co. Leitrim, at Coleraine, Co. Derry, Newbridge and Kilcullen, Co. Kildare, Leihglinbridge, Co. Carlow, Kilkenny city and Drogheda, Co. Louth. Many of the bridge locations such as Athlone, Sligo, Drogheda, Coleraine, Ballinasloe later grew into sizable towns.

All the bridges, apart from the example built at Sligo in 1360, were of timber. A number of the bridges were built of wickerwork hurdles. The three bridges built in 1120 by Toirdhealbhach Ua Conchobhair, King of Connaught, at Athlone, Shannon Harbour and Ballinasloe were of wickerwork hurdles. Toirdhealbhach built two more wickerwork bridges at Athleague and Athlone in 1140, another at Athleague in 1153 and at Athlone in 1155. Ruaidhri Ua Conchobhair built a wickerwork bridge at Athlone in 1159. The use of wicker hurdles would have allowed the bridge components to be fabricated from material available in the local area or they could have been prepared off site. The panels would have been relatively easy to transport on horse-drawn drag carts to the river site and then quickly assembled.