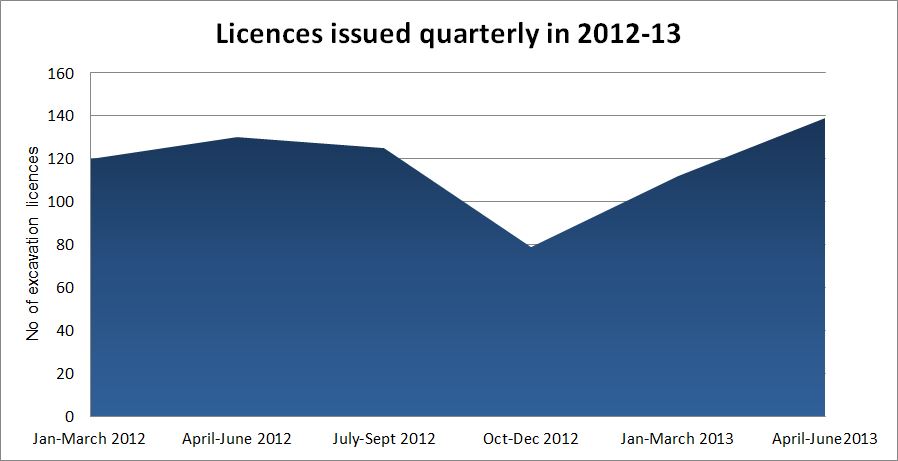 New data confirms that the decline of archaeological excavation in Ireland has stopped!

In the second quarter of 2013 there were 139 excavation licenses issued by the National Monuments Service in the Republic of Ireland. This is an increase of just under 7%  on the number issued in the same period in 2012 and reverses the small decline seen in the first quarter of the year. Overall in the first half of the year there were 251 licenses issued which is almost identical to the 250 issued in the first half of 2012. If this trend continues through to the end of the year 2013 would be the first year since 2006 in which there hasn’t been a decline in excavation licenses.  The new data confirms the observation made in my April post that the rate of decline in archaeology had slowed. The new data suggests the decline may have stopped, for the moment at least. Whether this is a temporary pause or a reversal of the trend is not clear as other data is not as encouraging.

The archaeological licensing data contrasts with the Ulster Bank Construction PMI Report which recorded a reading of 41.9 for the month of April and 42 for the month of May indicating a further contraction in construction activity. This may be explained by the fact that archaeological data incorporates archaeological testing that precedes construction activity and the licensing data may now be signalling a slowing of the decline of activity in the construction sector. This should become more clear as the year progresses. Another encouraging sign is that the Central Statistics Office has reported that seasonally adjusted GNP increased by 2.9% in volume terms in the first quarter of the year.