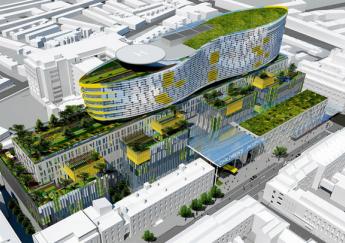 Strategic Environmental Assessment (SEA) is in the news because The Heritage Council, a statutory body, has made a formal submission at an Bord Pleanála oral hearing into the plan to build a 16 storey National Children’s Hospital in Dublin; stating that the Department of Health has failed to comply with the European Union SEA Directive by not carrying out a strategic environmental assessment of the proposal before it was formally adopted in 2006.

For those not familiar with SEA it is mandated by EU Directive 2001/42/EC of the European Parliament and of the Council On The Assessment Of The Effects OF Certain Plans And Programmes On The Environment. The Directive took effect in member states on 21 July 2004 and was implemented in Ireland through two sets of regulations: SI No. 435 of 2004 European Communities (Environmental Assessment of Certain Plans and Programmes) Regulations 2004 and SI No. 436 of 2004 The Planning and Development (Strategic Environmental Impact) Regulations 2004.

SEA is different from Environmental Impact Assessment (EIA) in that it looks at the likely significant environmental effects of plans or programmes rather than projects and is carried out by competent authorities, those responsible for the preparation or modification of a plan or programme, rather than developers. SEA is carried out out in relation to plans and programmes for: agriculture,  forestry, fisheries, energy, industry, transport, waste management, water management, telecommunications and  tourism; where these set the framework for future development consent projects and the competent authority determines they are likely to have significant effects on the environment. Some plans and programmes, such as those involving national defence, financial plans and some EU plans are excluded.

A competent authority must also screen plans or programmes not on the above list that set the framework for future development consent projects and are likely to have significant effects on the environment on a case by case basis. The competent authority must consult with the environmental authorities. These include the Environmental Protection Agency (EPA) and in relation to architectural or archaeological heritage or nature conservation, fisheries or the marine includes the appropriate minister. Determinations on screening must be made available to the public and notified to the environmental authorities.